While we feature many different files from the marketplaces here on Tuts+, one of the least showcased categories is admin themes, even though there are some awesome examples. Of the 140 different admin themes available on ThemeForest, we're going to look at seven of some of the bestselling, most highly rated and well designed files that you can download today.

Simpla Admin is the highest selling admin theme on ThemeForest, having a total of 3182 purchases at the time of writing. In addition to that figure, Simpla Admin has a full five star buyer rating and has been featured on ThemeForest, making it a fantastic choice for your hard earned cash.

Simpla Admin is very versatile and has a suite of features, including modals for messages and notifications. Although primarily consisting of a grayscale colour, you can easily brand the theme with different color schemes for particular elements.

Simpla Admin is available from $20 on ThemeForest.

Adminica is another highly versatile, well designed admin theme which is one of the bestsellers in its category. With a full five star buyer rating, Adminica has already sold over 1,800 copies on ThemeForest - and for good reason.

Adminica looks great, and includes a bunch of customizable options from choosing whether the layout will be fixed or fluid, to opting for one of the seven color schemes. Additionally, Adminica White introduces a new, clean theme for your administrative pleasure. Adminica even boasts compatibility with a number of mobile platforms, including Apple's iPad.

Adminica is available from just $25 on ThemeForest. 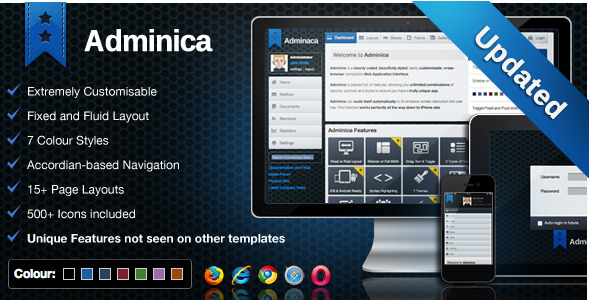 White Label is a beautiful, light admin theme which has sold over 1,800 copies on ThemeForest and gained a five star buyer rating. The "full featured" admin theme includes two pre-made skins that are iPad and iPhone friendly, great if you want to be able to moderate on the go.

White Label can be bought from $25 on ThemeForest. 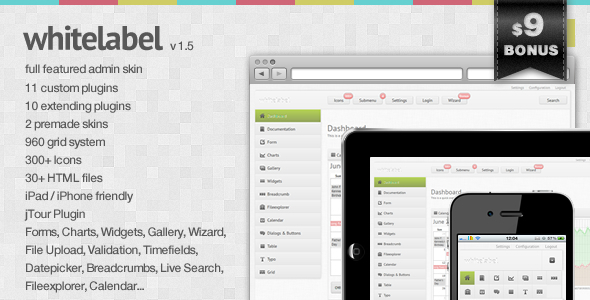 Adminus is an admin theme that I've had personal experience with (and so have potentially thousands more since Adminus has sold over 1,600 times on ThemeForest).

Adminus is a very simple, single-column layout that can be used in both fixed and fluid modes. Adminus is great for admin sites which have a large amount of data in theme, with a beautiful focus on graphs and tables. Adminus, which comes in three pre-made color schemes (blue, green and red), is very versatile and will suit almost any admin dashboard you have.

Adminus is available from $20 on ThemeForest. 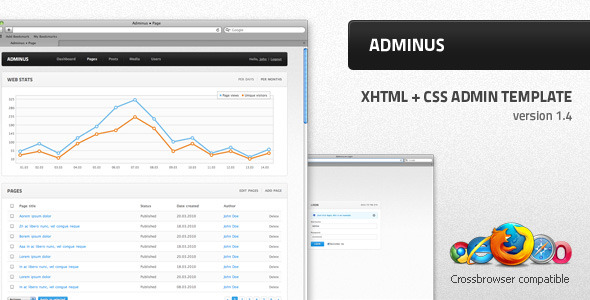 Chromatron is a backend theme that's sold over 800 copies on ThemeForest, holding a full five star average buyer rating. Chromatron is simple but still well designed, containing all the basic features you'll have come to expect from admin themes including tables, graphs, notifications, forms and modals.

At the top of the design, Chromatron has space for a number of widgets, allowing users to build and show data like visitor numbers, post counts, to-do tasks, should they have that functionality. This is a particularly good way to grab a snapshot of the state of your app or website, and is one of my favorite little details of Chromatron.

Chromatron is available from $15 on ThemeForest.

It's Brain is another admin theme which has been featured on ThemeForest, also holding a five star buyer rating. It's Brain is a very flexible, clean design that's great for a wide range of uses, including support desks, which its demo site highlights.

Like Chromatron, It's Brain contains a number of details you'll appreciate, including the statistical snapshot atop each page. It's Brain contains support for a number of form elements, in addition to a gallery, a calendar and other interface elements. To throw some statistics in there, It's Brain includes ten types of AJAX loaders, seven button colors, two breadcrumb navigation types, four notification messages and eleven widget styles.

It's Brain is available from just $21 on ThemeForest.

Admin Control Panel v2 is a slick admin theme with one of my favorite designs of all admin backend themes available on ThemeForest. Since its August 2011 debut, this theme has sold more than 400 copies and has a 4-star buyer rating.

Admin Control Panel v2 is centered around a tabbed interface and includes styles for a wide range of form fields, tables, charts and graphs, notifications and buttons, which all look great. The whole theme is clean and sleek, looking great with the purple space-style background it's presented on.

Admin Control Panel v2 is available from $14 on ThemeForest.

While I've showcased seven of my personal favorite, bestselling admin themes, there are hundreds more which are well worth checking out.