Blog Action Day is an initiative originally founded in 2007 by our very own Collis and Cyan Ta'eed, along with Leo Babauta. Each year it aims to bring much needed exposure to a worthy subject, and 2011 focuses on Global Food Shortage. Today is also World Food Day, so to mark the occasion we've rounded up 10 noteworthy food charity websites for your scrutiny.

Manna Foodbank is part of the Feeding America group (which we'll look at in a moment) and distributes food throughout Western North Carolina. The design is clearly connected with Feeding America; it's clean, the colors are - well - lovely, and the layout is intuitive. Emotive imagery is used effectively for a trustworthy and well-organized feel. 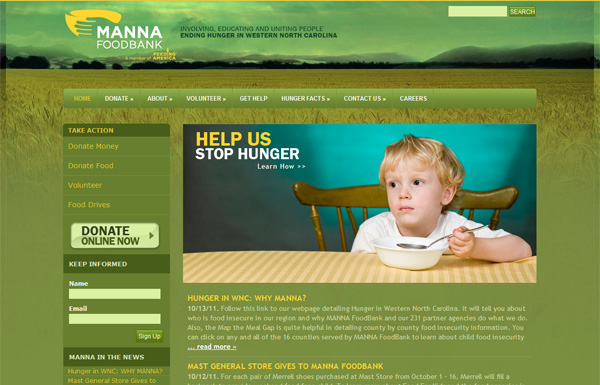 You'll have seen this design crop up in roundups on several websites. The Blogger Bake Off is a campaign which invites people across the globe to raise money by baking. You can also 'donate' recipes which go into use in African bakeries. It's accessible to all, and the site does a great job of hauling you in! Brilliant colors, in-your-face typography, and a hand-crafted feel. Well worth checking out for the web design alone..

Breadline Africa isn't a food charity, and its website isn't going to receive design acclaim any time soon, but the cause caught my eye (and has 'bread' in the title). They convert containers into living accomodation for the homeless in Africa. A cheap and effective idea, well worth a mention.

Change.org were themselves behind the wheel of Blog Action Day before passing on the torch to Voice. Their site offers a petitioning platform for fundraisers trying to gain exposure for their causes. As it features a wide spectrum of subjects and organizations, the site itself is tactfully neutral. The color scheme reminds me of Scott Thomas's Obama design (but maybe that's just me) - a clean, respectable look, with a clean respectable layout. 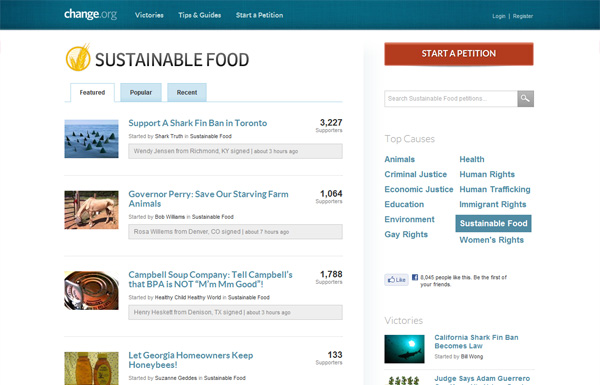 Feeding America features a large and welcoming image which compliments the logo and the rest of the colors used in the design. Its pseudo 3D slider is a nice detail and the whole atmosphere invites you to look further. Striking Donate Now buttons are a common and necessary aspect of charity sites; those on Feeding America are subtle, yet effective. 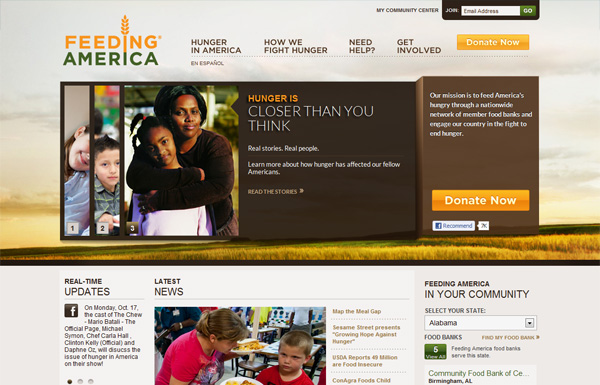 I like campaigns such as this; we discard terrifying amounts of food, whilst heading rapidly towards global shortage in many areas. Oz Harvest gathers up what would otherwise be waste, and redistributes it to the needy and less-fussy. The site itself has opted for the popular and effective yellow and black combo, giving a modern and pro-active feel to the charity.

This one caught my eye owing to its left-alignment. Technically, it's not the most advanced of excecutions, but the monochromatic+1 color scheme is striking, and suits the simplistic nature of the charity perfectly. The menu is also a nice touch; ordinary people, lending a sense of teamwork and co-operation. 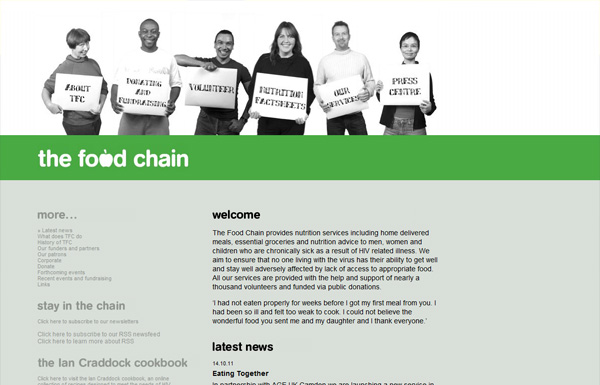 The Food Cycle is another example of an organization which takes surplus food, skilled volunteers, and combines them in charity kitchens for the benefit of those in need. The website is simple, yet effective, and though it may not be to everyone's taste, stands out enough to earn it a worthwhile look.

A warm and crafted feel for the Cookies for Kids' Cancer website. This is another charity which raises contributions through the baking and culinary skills of others. Be a 'good cookie' as they say, and get involved to help pediatric cancer.

I like this one. Perhaps it's because the orange band at the top reminds me of Stack Overflow, but in any case, this site has a controlled, organized feel to it. It's clearly bound to a solid grid, mixes strong display fonts with some more decorative serifs, and keeps the colors clean and corporate. It instills a sense of trust, as though it knows what it's doing. A bit like Stack Overflow. 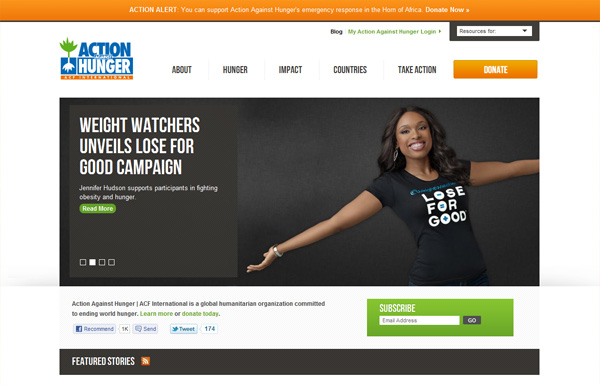