Peter Gasston's Book of CSS3 has been by my side, on my desk, and in my laptop case for a couple of weeks now. It's a seriously substantial guide, and in it Peter leaves no CSS3 stone unturned.

Read on for more of my thoughts on the book, and enter to win a copy of your own! 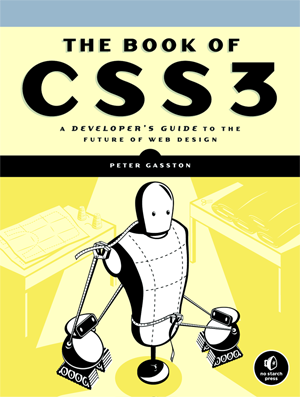 I'm afraid the draw has already taken place... Congratulations to our winners! Never mind if you weren't one of the lucky three, keep checking back and you'll hear of plenty more giveaways soon ;)

My Thoughts on the Book

Peter Gasston must have real problems making a cup of tea in the morning, or finding his way round the London underground. I can't believe there's room in his brain for any of the normal tasks which we all take for granted, because there's just so much CSS3 in there! The Book of CSS3 comprises over 250 pages, each filled with data, examples, syntaxes, advantages, possibilities, reasons, limitations, and facts about the huge array of CSS3 properties. There isn't a single aspect of CSS3 which isn't explained fully in this book.

My hat goes off to Peter because committing such a topic to print must be very stressful. There's no delay when you're putting CSS3 rules and regulations in black and white; I'll bet that the minute pen hit paper one of his browsers went *ping* and updated the way it would be handling things.

To combat the reality that CSS3 and browser development is a fast-moving and ever-changing whirlwind, Peter (logically) often reminds us that browser compatibility may not follow what's written. There's also an accompanying site where you'll find regular updates, changes to the spec, and brand new features.

Luckily though, the concepts themselves change very little, and as a result we're given a thorough guide to each toy CSS3 has thrown our way. 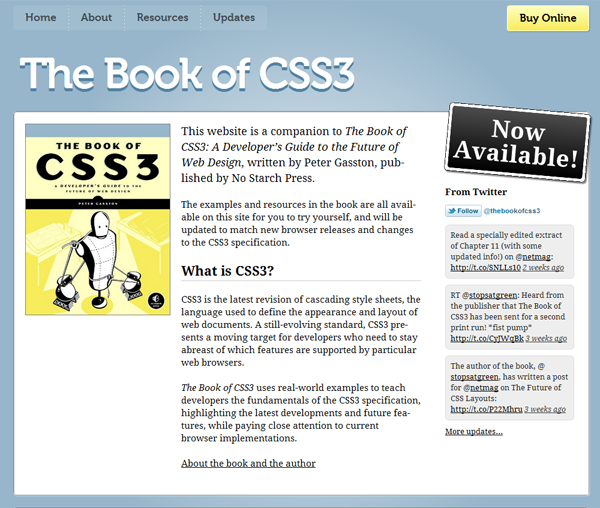 The book begins by introducing us to CSS, what it is, the recommendation process, browser vendors etc. (worth reading even if you know your stuff), before diving into practical CSS3, chunk by chunk. There's probably a better collective description than chunk, but that's what we're dealing with. These chapters aren't regurgitations of the spec documentation, listing property after property, they focus instead on areas of use. Chapter 6 (for example) covers Text Effects and Typography, which bunches (amongst other things) text-shadows with text-overflow and font-smoothing - and follows @font-face in chapter 5. If you're working with typography, all the relevant information is in one place.

The same applies for others areas. If you're currently focused on the presentation and decoration aspects of CSS3, you'll find it all grouped together. Transformations, transitions, and animations? All together. The closing chapters focus on increasingly unfamiliar areas of CSS3 (such as 3D transformations, and layout capabilities) before concluding with a chunk about the future of CSS and some pretty spectacular concepts.

That's the essence of this book. Don't expect to pick it up, read it from the front cover, whack a bookmark in, and carry on next time where you left off. You'll more likely absorb the preface and introduction, then jump to whichever area you're currently interested in. There's no real-world project that you build upon as you read; it's a solidly laid-out practical reference, which you'll return to time after time.

I've read it. All of it. But I'll be keeping it close to hand for the foreseeable future :)

The Book of CSS3 is available from No Starch Press