How to Manipulate and Animate SVG With Snap.svg

In this tutorial we're going to introduce Snap.svg, a JavaScript library which assists in animating and manipulating SVG content. To demonstrate some of the features available, we're going to animate an SVG eye.

Snap.svg is a JavaScript library which makes it easy to create and manipulate SVG graphics for modern browsers. It is the successor to Dmitry Baranovskiy's Raphaël; the most popular Javascript library for working with SVG.

Raphäel.js is a great library. Released in 2008, its biggest win was its support for browsers from IE 5.5 onwards. However, supporting so many browsers was limiting and meant that it couldn't implement the latest developments, instead relying on a common subset of SVG features.

After a while the Raphäel.js community divided in two, one group which relied on it for cross browser compatibility, and other one which used it for creating SVGs. This latter group demanded changes to support more SVG features which Raphäel.js couldn't handle.

Hence Snap.svg was built, written entirely from scratch by Dmitry Baranovskiy (of the Adobe Web Platform team), in order to work with SVG more easily and using the latest that SVG can offer; features like masking, patterns, gradients, groups, animations and more.

What Can You do With Snap.svg?

Take a look at their API documentation and you will see features like mask, group, gradient, filter, animate and pattern, all of which you can apply to SVGs.

Snap.svg will help you generate graphics, but it can also work with existing SVG. This means that your SVG content does not necessarily have to be created with Snap.svg, you're also free to manipulate graphics created with tools like Adobe Illustrator, Inkscape, or Sketch.

Firstly, you'll need to download Snap.svg. With that done, you'll find the following in the archive:

Setting up a Project

Having downloaded the Snap.svg resources, begin a new web project which needs to include:

Create an HTML template and reference "scripts/snap.svg.js" and "scripts/main.js" scripts somewhere on your page.

After that, place an <svg> container inside the <body> and give it an id. You should have something a little bit like this:

Let's now jump directly into coding. To follow along you'll need some basic JavaScript knowledge and understanding, but it doesn't matter too much because we're not going too deep with this tutorial.

Firstly, we'll initialise Snap, pointing to the svg just created and assign it to a variable. In our case the variable is called s

From now on, within the s variable we'll have access to all Snap.svg methods. For example, let's say that we want to create a circle, or a rectangle.

The code above will generate the following result:

As you can see from attached screenshot, the shapes, by default have a #000 ( black ) fill color without any other styling. Let's interact with them and add some more styling attributes, like fill color, fill opacity, stroke color, stroke width, stroke opacity. You can check SVG Attributes for more details.

These attributes have made our svg shapes much prettier!

Let's take our example and go beyond the basics.

Snap.svg uses a powerful weapon called group, which, as the name suggests, groups vectors together, making them one shape. You can group as many shapes as you want by adding them as a list.

Let's create two circles, group them and lower the fill of each circle to visualise more clearly what's going on.

Masking Shapes With Other Shapes

Let's now say that we want to create an imaginary eye using the grouped elements we've already made. We can do so using mask. First we need to create an extra ellipse and place it in the middle of the group. 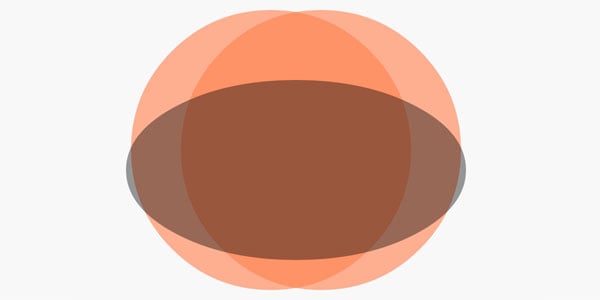 Now we need to mask the circles with our ellipse, adding a different fill color to the ellipse:

Continuing with our example, we can make this eye blink, by adding an animate method. To animate the ellipse we just created, we'll modify the vertical radius from 1 to 90 (which is the current value) and back again.

Create the animation and wrap it inside a function called blink.

Now create a setInterval to call the blink method once every three seconds, in order to create a blinking effect.

As mentioned previously, these features are supported in modern browsers: IE9+, Safari, Chrome, Firefox, and Opera.

Snap.svg is available under an Apache 2 license which means it’s completely open-source, and completely free.

Snap.svg lowers the barrier for some pretty amazing SVG manipulation. I hope you enjoyed following along and that it's inspired you to look further into SVG!