Profiling: Can You Stereotype Your Users by Their Browsers?

A (bogus) report issued on Friday suggests that Internet Explorer users are dumb. While you may or may not agree, it does beg the question: can we stereotype our users by their browser choice? If so, can we deliver content and user experience based on those generalizations?

The report concludes that if you have a low IQ the odds are that you use Internet Explorer. More intelligent people appear to have moved away from using IE in the last 5 years. Excellent, the confirmation that we've all been waiting for. 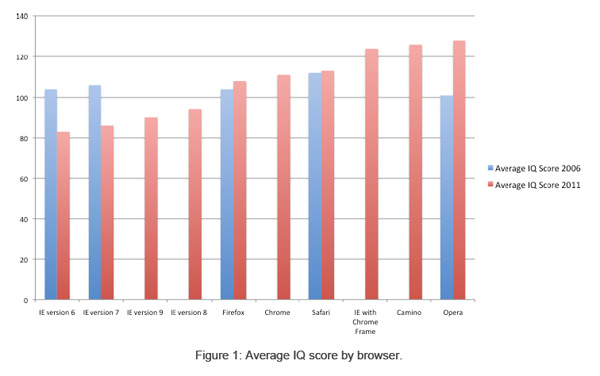 But let's say we were to take the generalization further, can we assume other characteristics about browser users? For example, who is the average IE user?

We all know this stereotype; he (or she) is a PC user (let's ignore the fact that IE for OSX even exists) and opts for Internet Explorer not through conscious choice, but because it's handed to him on a plate with his operating system. He's not particularly interested in optimizing his browsing experience, remains blinkered to alternatives and finds the prospect of tailoring applications to his needs pretty intimidating.

He religiously updates is his array of anti-virus packages, calling customer support each time he does so.

On the other hand, it may not be entirely his own fault. Perhaps he's chained to a cubicle in a large corporation, limited by a locked-down intranet and an I.T. department which adamantly refuses to leave the 1990's. Either way, he's not a web designer.

Mr.Safari is a dedicated Apple chap; he has the iPhone, the iPod (eagerly awaits the next incarnation), has a nice hair cut, and has lost the ability to browse without coverflow. He's not a web designer either. Oh, and he as an apple TV. 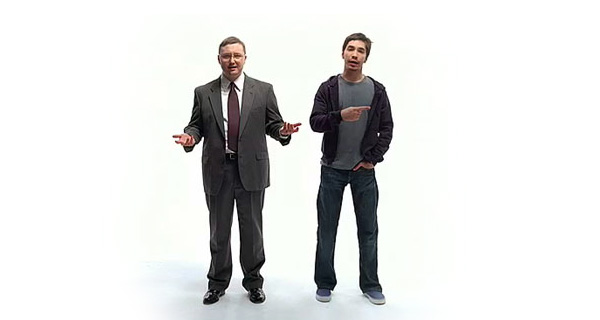 I don't know why these two sprung to mind.

Once we begin recognizing traits and characteristics in groups of people, we can develop and benefit from demographics.

We're all consumers and we're all targeted on a daily basis. That dating website ad you saw on Facebook earlier? There's a reason you saw that - your Facebook profile says you're 'interested'. Those recommendations Amazon emailed you yesterday? They seem to know you pretty well, and they do so thanks to your history of purchasing patterns. 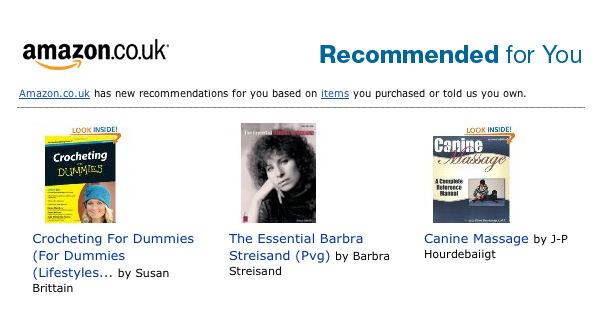 How do they know?!

So we're profiled and served content by marketing strategists all the time. Companies who want the best return possible from their advertising budgets use consumer profiles to calculate where they're most likely to sell what.

Yes it can. Many people argue that assumptions can be made about the nature of browsing done on a desktop computer as opposed to that done on a mobile device. It's referred to as applying context. You might, for example, choose to deliver abbreviated content to Mr.Blackberry standing at a bus stop. After all, he's unlikely to be browsing at length, he just wants the essentials. Likewise, you'd perhaps be happy to furnish Mr.MacBook, relaxing at home, with more information and a richer web experience.

Assumptions made about the end users, based on the devices they use, don't seem unreasonable. But how do we separate experiences, or alter our designs, to cater for these differing needs?

We Have the Technology

This weekend I read Ethan Marcotte's Responsive Web Design, an enlightening read which I'll be reviewing soon. In it, amongst other things, he discusses CSS3 media queries which allow us to identify characteristics of the browsers and devices accessing our content. Using media queries we can optimize our designs for the wide range of screen resolutions we're faced with these days.

Even the current Tuts theme demonstrates this to a degree (though it's achieved with javascript, not media queries). Go on, reduce the size of your browser and you'll see the 'fixed width' layout transform to a narrower alternative.

You and your smaller browser have just been accommodated. You were recognized as browsing in a certain way, at which point the output of what you're browsing (and therefore your experience) was manipulated.

The concept behind Progressive Enhancement in web design sees the least capable browsers catered for first. Features and enhancements are then progressively layered for the benefit of browsers who can deal with them.

It's a practice which stems from technical limitations. Some users may miss the aesthetic pleasure of a subtle drop shadow here and there, but it's not the end of the world.

If that's accepted practice, what about acknowledging the limitations of the users themselves? In terms of serving adverts to selected audiences, you could argue that impressions of an advert for the Financial Times would see higher conversion rates if aimed at people with higher IQs. If we know that Internet Explorer users are likely to be less intelligent than Chrome users, wouldn't such an advert be far better served to the Chrome browser?

And should we take this into account with our design? We know (thank you Steve Krug) that no user should be forced to think unnecessarily; a user interface should be intuitive. Perhaps we can apply this on a scale and accept that users of one browser are likely to behave differently to users of another? Could we, for example, credit Opera users with being extra savvy and therefore make their experiences that bit more rewarding?

And the Answer Is..

..it's up to you. During the first draft of this article I clearly stated my own personal conclusion at this point, but that's not my job. So I deleted it. As ridiculous as the prospect sounds, I can't help feel there's a worthwhile debate to be had here. If marketing can successfully categorize target audiences, can we as web designers do the same? Can we more effectively deliver our messages by tailoring our work to distinct niches?

But bear in mind that pigeon-holing users in any way:

[..] is no substitute for conducting the proper research into how your audience accesses your site; not only the devices and browsers they use, but how, where, and why they use them.
Ethan Marcotte - Responsive Web Design

The concept of optimizing websites, altering their behavior to accommodate different end users is a real issue. I brought this up today, albeit soaked in hyperbole, because I want you to get used to the notion of Responsive Web Design - you're going to be seeing it quite a bit on Webdesigntuts+