Reader's Poll: Where Do You Work? + Show Us Your Office!

It's been two weeks since our last poll, so it's time for another! Today we're asking you, "where you get most of your web design work done?" We're also inviting you to share photos of your own office at the Community Flickr Group!

Web design is one of those few careers that can pretty much be accomplished from anywhere on the planet, granted that you have the right equipment and a decent internet connection. I've known entire teams of designers that work remotely and only check in once or twice a day (some from exotic surf spots, some from cold, icy cabins). I've also known design agencies that lock themselves inside swanky offices until they finish their projects.

The choice of where to work is an important one though... for a web designer, it says a thing or two about how he/she prefers to work and what they value. I for instance, like being at home - close to family, a coffee maker, and a swimming pool on hot days. Other designers just want to be out in the outdoors, working from an outside cafe or park.

There are a lot of different reasons that you might choose one location over another - Some things to consider:

Show Us Your Office!

A while back we had a great forum thread at ThemeForest where authors posted pics of their "offices". It's actually quite fun to see the setups that other designers have, so I'd like to invite anyone who wants to share pics of your office to post them over at our Community Flickr Group.

Just join the Webdesigntuts Flickr Group, upload an image, then add it to our group using the "Actions" dropdown :)

Here's a few to get us started! (well, my office and Philo Herman's): 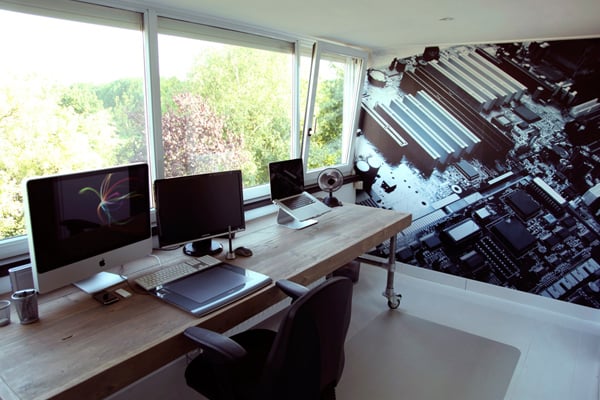 Obviously, you might have more than one answer for the poll... heck, you might have some great stories of working from random and far off locations. For this poll's discussion food-for-thought, consider the following questions and post your response down below in the comments section!