It's been a while since we released some site news for Webdesigntuts, but we've been busier than ever so it's time to check in! 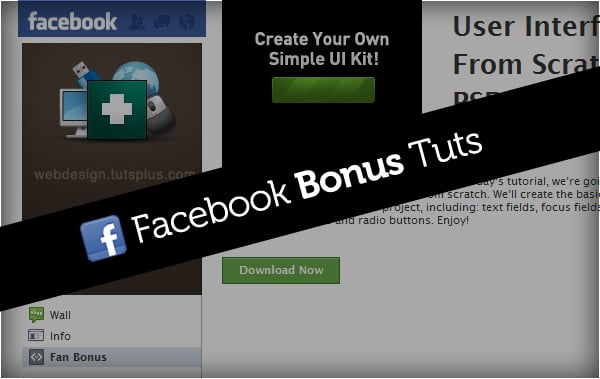 Recently all Tuts+ sites have started making pre-release tutorials available to Facebook fans. That means if you follow us on Facebook you’ll receive a tutorial a full 30 days before it is published on the blog while everyone is still waiting.

Want a free tutorial right now? It's easy, just "Like" our Facebook profile and you'll have instant access to this month's bonus tut under the "Fan Bonus" link on the left sidebar

We've already been releasing somewhere between 6-9 "big" posts a month, but starting later this month we're making a slight change to the publication schedule by increasing this number to 8-12. In short, we're aiming to bring more of the high quality, comprehensive, in-depth tutorials and fewer of the smaller posts that tend to feel like space-fillers.

You may have already noticed, but we've also been offering more video based tutorials for you visual learners as well!

What does this mean for you? It means you'll be able to get your hands on a lot more useful web design tuts and videos! We're also actively scouting out big design agencies and rockstar freelance designers to guest star in their own tutorials... so you can expect to learn new and exciting tricks from the best and brightest new designers in the industry.

This leads me into my next news item...

We're interested in hearing from new authors, design studios, and freelance designers. We're willing to back that offer up with cold, hard cash! We're offering upwards of $500 for comprehensive tutorials or articles, so if you've got some time and a great lesson to teach, send in your ideas through our Write for Us page!

I'm specifically hoping to find a couple designers to write "complete tutorials" - meaning that you take our readers from the planning phase all the way to the coding phase in two or three sections (yep, you'll get paid accordingly!) So if you've been thinking about ponying up a tutorial, now's a great time to jump in!

This past weekend I presented at SXSW on the panel, "Making Money with Wordpress (Without Working at Automattic). The panel included Alex King (Crowd Favorite), Shane Pearlman (Shaneandpeter.com), and Sonia Simone (CopyBlogger).

For my part, I covered the sub-topic of "commoditizing your byproduct" as a web designer, which ultimately means finding ways to resell designs as templates on sites like ThemeForest. It turns out there's quite a bit of interested in the topic, so I'll be doing some recap blogging over the next week to review the issues as they relate to web designers. We'll also be working on digging up a video if it's at all possible!

That's It From Our Side: Give Us Some Feedback!

The great thing about the community here is that ideas flow both ways - we've covered a lot of great content so far as a result of reader feedback (from Fireworks to Design Theory), but we're always on the lookout for that next big trend that you guys/gals want to know about. If you've been looking around for an article or tutorial on a specific topic, trick, or technique, let us know in the comments here!

Are we ready for another contest? The last contest that we had helped launch our Flickr Group and introduced us to some amazing new designers. So, my question to you guys is simple: is it time for another group contest? I'm specifically thinking about a design challenge featuring prizes and portfolio exposure for the winners... but let me know what you think down below!

Brandon Jones
I'm Brandon! Web design speaker, author, former editor for Tuts+, and dad of 3!
makedesign
Looking for something to help kick start your next project?
Envato Market has a range of items for sale to help get you started.