The Stone Age of Web Design

The last time we had an essay from Speider Schneider, it was Halloween and he told us about his why art directors should never run with scissors. Today, as we celebrate the new year, we have another article from Schneider that takes a look back... waaay back, at the dawn of web design in the 1990's. Get ready to gasp in horror at just how archaic things were in the Stone Age of Web Design.

The Dawn of Web Design (Queue the Jungle Drums)

While volcanoes spewed molten lava and Velociraptors roamed the earth, the early 1990s was a frightening place for web design. HTML confused the tribe of humans and those of us who understood it were burned as witches for our understanding of the evil devil’s tongue.

It was, of course, true. With a few tippity-taps on a keyboard, which was made from mud and sticks, we could make pages with pictures, message boards and links that once clicked upon, would take you to other pages and places. Wav files of our favorite TV themes, songs and sound bytes were free for the taking and for MAC tribe members, and there was demon software that would change them to system sounds. It was black magic to all as fire had just been discovered and we still feared the dark and the high-pitched squeal of dial-up connecting to the internet. Oonga-boonga!

As with the Bronze Age, suddenly there appeared another magical tool – PageMill. It was intuitive, although still not quite drag and drop technology. It was beyond the understanding of all but a few humans who could read and comprehend the pages of instructions. Today it would be laughable to most five year-olds... but it gave me the courage and ability to label myself as a “web designer.”

My first site, thanks to another disciple of the netherworld of Hades, Angelfire.com, was a site for my newborn son. Angelfire.com offered free sites with a whopping 4 MB of space. It was almost the size of the universe! How could anyone ever fill such a vast space?!

All one had to do was allow them to place a banner at the top of each site. The banner, of course, was easily removed simply by going into the source and deleting the HTML that linked to the banner. Angelfire, probably web mastered by one person, would never catch the revised code... those were the good old days.

The site for my newborn son was simple but fun. There were links, images, animated gifs and it allowed friends and family around the world to see pictures of my son as he grew (granted that they had access to this mystical tool called the internet).

For your enjoyment (and my own humility), here are a few images from that first site: 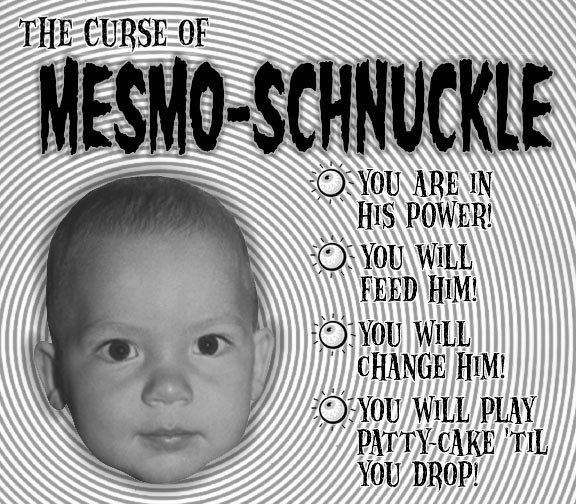 Each month had a new picture, but I had to somehow make them out of the ordinary. My mother-in-law hated it, and honestly it was all pretty silly, but that was the nature of web design back then. Designers (if you could call us that) were mostly rogue hobbyists and publishers with too much time on our hands and access to early versions of graphics software... which were barbaric compared to 2010.

I had to have a section with “nice” pictures for Grammy. It was balanced with a section of the same photos with snarky comments called…

I had also found that by scanning images from a book and using "Gifbuilder", I could create moving animations from Edvard Muybridge photos.

What was shocking was the number of hits the site received; The number of incoming visitors far out numbered my friends and family. My son was getting fan mail from around the world. It seems people were so taken by the cyber magic, they were passing links to others and it became “viral.”

Taking full advantage of my growing network of followers (words such as “followers,” “viral” and “network” hadn’t actually yet been coined yet), I started to create other sites on Angelfire.

Victims of my hot and spicy chili always wanted the recipe…more in an effort to destroy it to save future generations, I suppose... so I created a site just for the recipe:

I think the animated gif flames and dancing skeletons really made the site! They certainly made up for the typos. Fink fonts were also just introduced to the market by House Industries and were getting a big workout from every designer on the planet.

Once again, the site became viral. There wasn’t much to garnering a huge audience as there were about 78 web sites back then and 24 of them were mine. More importantly – I was starting to get e-mails and phone calls about creating sites for other people and businesses. It was hard to settle on a price for a site. I didn’t know anyone else who was doing web design.

People Paid For This?!

For about $500, I started creating sites for small businesses and such. It was exciting, but frightening as no one really knew what we were doing. There was no way of telling if they would be successful at selling a service, and $500 seemed like an outrageous fee for something so new, so unknown, and so strange as a website. Would people even see the site? How would they find it? What was a mouse?...

Here are just a few of my earliest examples... mind you these were stellar "Portfolio Pieces" back then, and clients and visitors were impressed beyond words at the time: 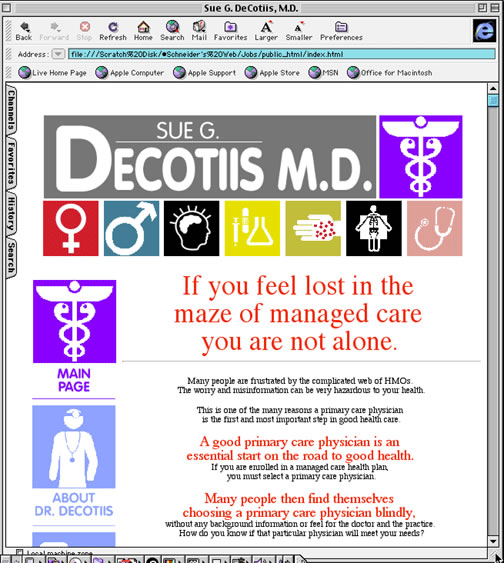 Above: A doctor wanted something people who traveled to New York City could use to find her. That sounded great... except no one had a laptop back then. The one model on the market weighed 87 pounds and it was too big to take on trips.

Above: A small museum in Massachusetts wanted a site to highlight their collection and encourage membership. As with the neighboring town of Salem, the board accused me of witchcraft and burned the site. 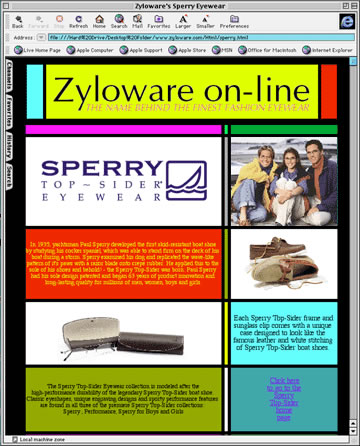 Above: A glasses frame wholesaler wanted a “sophisticated” site with a page for each line they represented. This was the big time and I made several thousand dollars on a half dozen pages and updates. All I had to do was size photos and fill tables with color blocks.

Above: Simply placing a JPG onto an HTML document worked as a landing page for a company that wanted a web presence. They never even finished the actual site, but the landing page was more than any local business had at the time and the e-mail button and contact information was enough to impress potential clients who stumbled onto the page.

The official response from Mattel was to cease and desist. Legally, it was covered under the Spoofing Law, but in the wild west of the internet, no one really knew what was right or wrong and most big businesses feared the internet as much as they were curious about it. Note the nod to the CD-ROM portfolio. This was just another “new” way to show work in a digital format.

32x32 Icons and the American Museum of Illustration

Thanks to some icon creation program (which name I have long forgotten), I started creating 32x32 icon sets. While they were pitched as giveaways (most companies wanted to sell them). The idea of digital marketing was unheard of and no one could understand the idea of viral free content.

Having created dozens of icon sets, I was invited to show them at the American Museum of Illustration in New York City. The show was entitled 32x32 – Pixelations. The reaction was either negative (as people didn’t consider the computer able to do "illustrations") or the often repeated statement, “I guess someone has to make these things!”

Yes, someone did have to create them... and the new site iconfactory.com was one of the first with six whole sets of icons for, gasp…free! Nowadays, of course, you can find thousands upon thousands of icons for free.

Finally, the last phenomena worth mentioning from the "dawn of web design" was the discovery of custom desktop graphics (usually saved from the web). Desktop patterns and posters were as easy as creating a .PICT or .JPG, but the impact was huge and they became ridiculously popular in offices. Exhibit A:

So, children of the digital age, that is how it was done almost 20 years ago... when a MAC Performa computer cost $5,000 (with a 14 inch monitor) and 8 MB of RAM was $500. We were astounded at Zip drives holding almost 100 MBs of files and a Syquest disk could be erased just by shaking it like an Etch-A-Sketch! Jazz drives would be a whole new universe of storage and make great drink coasters once CD burners became available!

It's amazing how far things have come in under two decades... now you can get 16GB on a drive the size of a thumbnail, and all of the "amazing web designs" we created back then are laughable by today's standard. Then again, maybe it hasn’t gone far enough? Where the heck are those flying jet packs we were promised in the 1970s!?

We hope you enjoyed this little retrospective essay! What were your earliest memories of experiencing web design? 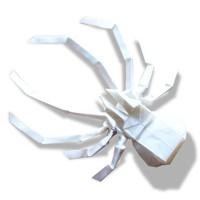 Speider Schneider
Speider Schneider is a former member of The Usual Gang of Idiots at MAD Magazine, “among other professional embarrassments and failures.” He currently writes for local newspapers, global blogs and other web content and has designed products for Disney/Pixar, Warner Bros., Harley-Davidson, ESPN, Mattel, DC and Marvel Comics, Cartoon Network and Nickelodeon among other notable companies. Speider is a former member of the board for the Graphic Artists Guild, co-chair of the GAG Professional Practices Committee and a former board member of the Society of Illustrators. He continues to speak at art schools across the United States on business and professional practices and telling frightening stories that make students question their career choice (just kidding).
Weekly email summary
Subscribe below and we’ll send you a weekly email summary of all new Web Design tutorials. Never miss out on learning about the next big thing.
Advertisement
Translations