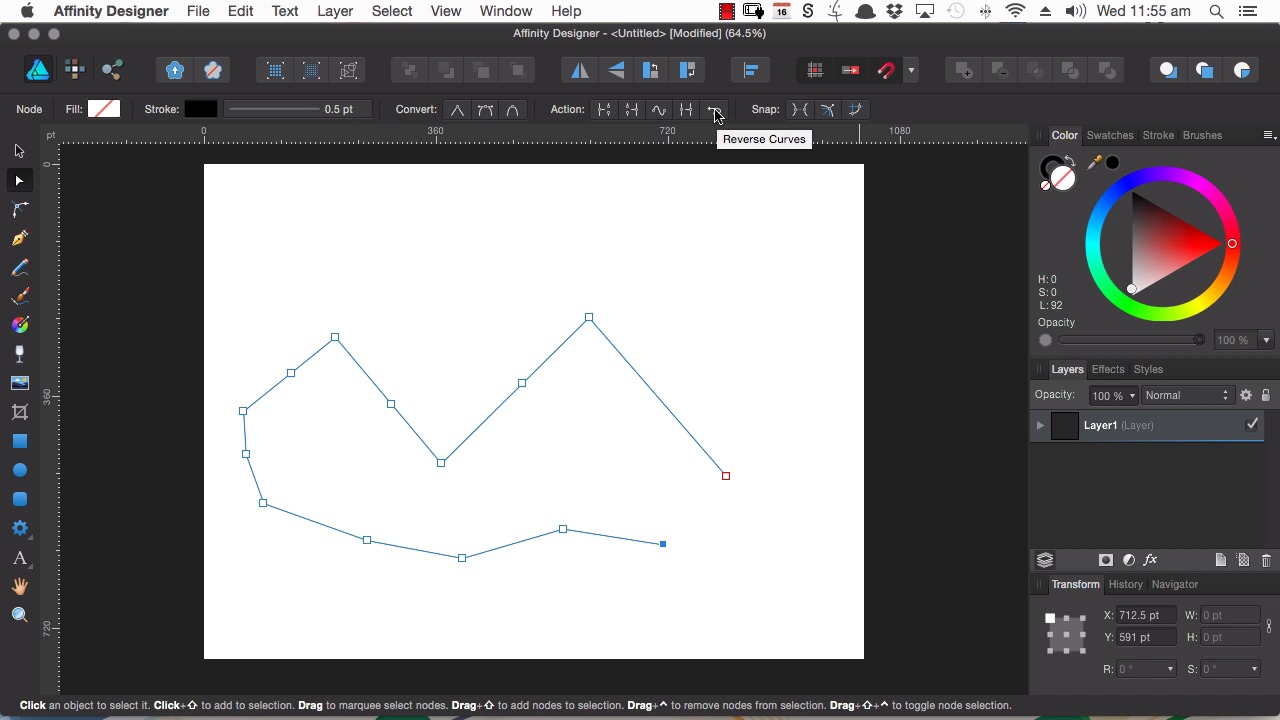 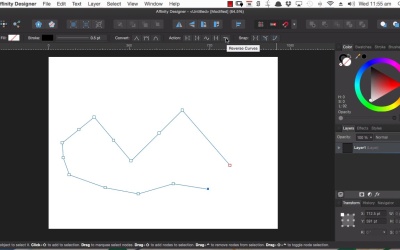 Learn how to edit existing curves by adding, deleting and connecting nodes in this lesson. You’ll also discover how to extend open-ended curves, close curves, join nodes and break curves.

Welcome back to Affinity Designer Quick Start. In this lesson, we're gonna go over how you can add and delete nodes from an existing curve. All right, so let's say we've started out with a square, and we've converted that to curves like we did in the previous lesson. Now if I want to add nodes into this existing curve shape, all I need to do is make sure I have the little white arrow here, selected. That's the node tool. You can also select that with a as shortcut. And then you wanna hover over the line, until you see that little squiggly bit, show up underneath that cursor. And then you just tap right on the line. And that will add a node in for you. So you can tap as many places as you want, and add in all of the nodes that you want. And if you want to delete a node, you just simply click it to select it with the node editing tool. Or you can draw a box around it, so just drag. You can select multiple nodes that way, and then just hit the Delete button and that will get rid of those nodes. So that's with a closed curve. But will also work the same in the open curve so with a line, say. Let's just knock out a line really quickly. So we've got a line there, and if we want to add nodes along the way, along the lines that we already have with the node tool, we can still look for that little squiggly line under the cursor, and just tap in more nodes. However, this node tool is for existing curves for existing nodes. You can't add new nodes out here within, sorry. If you want to add on to this line. Out on the end here, you need to go to the pencil. You'll need to select the end. And then you can continue adding nodes on to the end of that open shape. You'll notice that right now one of these nodes is red. And that's the root node for this line. You can't actually add any extra notes to connect to that root node. So if I did want to have another node coming from here, and going to here. I would need to reverse these curves. So I can look for this button up here, reverse curves. And there you can see that the red node has jumped to the other end, and this node has now been highlighted. And that means that I can now select the pen tool. And I can start adding nodes on to the other end. Now, if I want to close this shape, I just need to hover over that route node, until I see the little circle come up on the end of my cursor icon. And then just tap, and that closes that shape. So, then that can now be filled. There's also another way to close off an open-ended shape. Let's get rid of this. So let's say you're working with a pencil and you've drawn out a rough shape. And now your ends don't meet. So what you can do is grab the Node Tool, highlight both of these ends. And then up here, you'll find the close curve button. So you hit that, and now your curve is fully closed. Now in the same way in reverse, if you want to split open a curve, you can select a node at the point that you wanna break open the curve. And you can hit, break curve. And now you've got a new separate root node. And you can start adding extra nodes onto your curve. You can also use a similar technique to join completely separate curves. So just get rid of this one. So let's say we've got curve number one. And we've got curve number two. And right now they're completely separate. We can grab the Node tool and then hold Shift. And then click the second shape to select it. Now if we select both of these ends here and go to the join curves button. And that has connected our two shapes into one single shape that can be manipulated all at once. You might have noticed that some of the nodes in the shapes that we've been working on look a little bit different to one another. And they behave a little bit differently, and that's because there are different types of nodes. And we're going to check out what those different types of nodes are in the next lesson. We're also going to learn about the different types of drawing modes that you can use when you're creating shapes with the pen tool. I'll see you there.