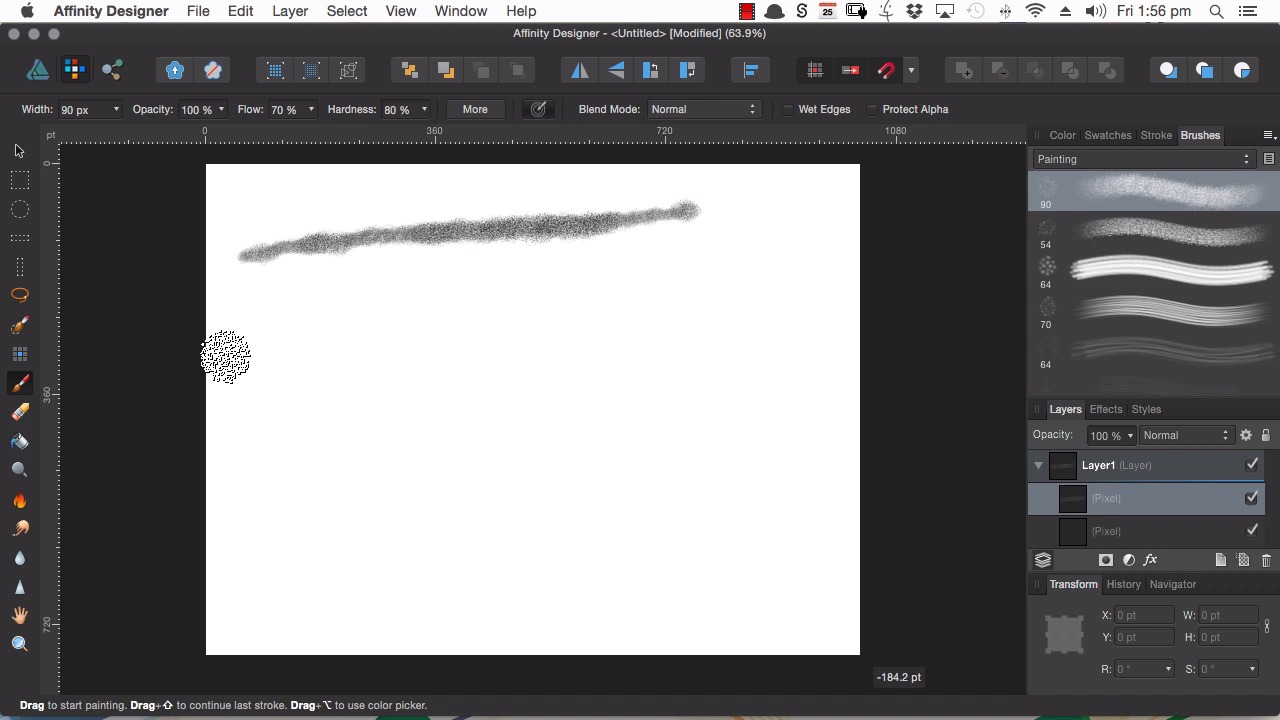 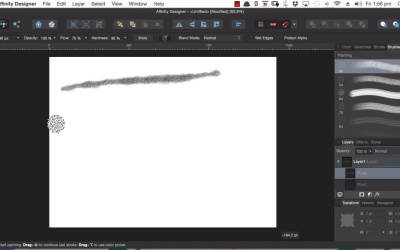 Whether you use a graphics tablet, or create art with a mouse, you can control the width variation and opacity of your strokes. Learn how to use pen pressure controllers, velocity controllers and manual pressure simulations in this lesson.

Hi, welcome back to Affinity Designer quick start. In this lesson, we're going to learn how you can work with a pressure based controller if you have a drawing tablet. Or, if you don't and you're working with a mouse, how you can work with velocity instead of pressure. Or, how you can use settings to manually simulate pen pressure. So first, we'll look at working with pen pressure from a drawing tablet. Now, when you're in vector persona, if you choose either the pencil tool or the brush tool, you'll have the ability to work with a pressure based controller. And what you want to look for up in this context menu is the controller, dropdown, and then choose Pressure. So, that pressure controller active, If I press down hide. I'll get a thicker stroke. And if I press down soft, I'll get a thinner stroke. And then, because we're using the vector persona, that we smoothed out as we go along. So, heavy lot, by comparison, if we don't have any controller on, if I press down heavy or I press down light, I'm gonna get the exact same width in my stroke. If you don't have a graphics tablet, you can still create varying width strokes, so instead of choosing the pressure control, choose the velocity controller. And the way that this works is slow strix will be thin and fast strix will be thicker. So, a slow strix will come out thin. And a fast strix will come up thickly. So, even if you're working with a mouse, you can still create those flowing style, varying thickness strokes. If you're using the vector brush tool, you can also control opacity, as well as stroke thickness. And this works best with pressure controller. It does work with velocity, but it works best with pressure. So, choose the pressure control. And then, we'll hit the sort of more button here, and we'll slide the opacity the variance ladder up so 100%. So now, soft strokes will come out quite opaque and hard strikes will come out darkly. And you have the same types of pressure and velocity based controllers over in the pixel persona when you're working with the brush tool. So, we'll just clear the canvas, make some space. The easiest way to activate pen pressure control with this brush is to hit this little target looking icon up here. And that forces pressure control, no matter what the settings are that are preset in the brush. So, we'll just activate that. And now, if we have a soft strick. It's lot and thin, and a hard stroke is heavy and thick. When you use that setting, know just bear in mind, that some brushes already have pen pressure settings, in the defaults. So, just turns off. And I was select this brush here. Now this brush, even with that target button pressed, a soft stroke looks like this or hard store looks like this. So, we haven't had to activate, this force pressure tool, in order to get variance in our brush strokes. So, just experiment with the different brushes when you first choose them to decide whether or not you want to have this forced pen pressure button active. All right, so the last thing that we wanna look at is manually simulating pen pressure, and this is great for if you really need fine grain control over the exact thickness at each point of a line. Or, if you don't have a tablet and you're not getting the effect that you want using the velocity controller. So, we head back to the vector persona, clear the canvas. All right, now this time, I'm not gonna use either of the freehand drawing tools. I'm going to use the pen. And I'm going to set it to draw out a line. So, just create a line. And now, what' we're gonna do is head up to the Stroke settings. And down here, you'll see there's a little box marked pressure. So open that up, and now, this is a curve you can use to manually simulate pen pressure. So, for example, we can make this line start thick, and finish thin, by holding down the option, or Alt button, and dragging down this end of our curve. So now, let's take a look at that. So now, that looks like a brush stroke that has started heavy and finished light. And we can also curve that to make it look more natural. And just like with curves that you create on the canvas, you can add multiple nodes. So, we can add a node in the middle just by tapping on the line. And then, we can reposition each of these nodes to create different types of effects. So now, we have it thicker on either end, and thinner in the middle. So, that's a really great way to manually simulate pen pressure, and to give you a really really tight control over the exact thickness of your line at each point. Next u,p we're gonna move into the final section and final lesson of this course. And we're gonna cover exporting. You're gonna learn how to export your entire document, or how to export it in pieces. And also, how you can set up continuous export, so that when you make a change to your design, all of your exported images are updated on an as-needed basis. I'll see you there.