How to Get More Women in STEM: Answers From a Panel Discussion

A few months ago I ran a panel discussion for the Swedish organisation DataTjej that included four panelists, plus an audience of 40 women and non-binary people, to dig deeper into the potential of role models. The discussion gave us a huge number of insights and showed that everyone can work together to overcome the issue of getting more women into STEM (specifically the tech sector). Here’s a distilled summary of the suggestions from the panel and the crowd.

STEM stands for science, technology, engineering, and mathematics, and is used specifically when referring to education and industry. It’s commonly known that STEM industries demonstrate a huge gender gap, which affects the diversity of the digital world that we’re creating.

“Women remain underrepresented in the science and engineering workforce, with the greatest disparities occurring in engineering and computer sciences.” – ngcproject.org

Governments, organisations, and small businesses commit vast resources nowadays trying to solve this issue and create a more diverse workplace. But in spite of a small increase in women’s participation in STEM in recent years, men still heavily dominate in tech industries. This is doubly problematic as more skilled workers are currently needed to overcome the skills shortage. Adding more women into the industry would kill two birds with one stone; we could create more gender equal, diverse products, whilst simultaneously benefitting from having more skillsets to choose from.

Some argue that these issues are related to there not being enough female role models within the industry, or that it’s due to stereotypical norms about women and IT, since it has been proven that women with strong role models in math and science are more likely to graduate with a STEM degree.

In the panel discussion I ran, the attendees were leaders, students, and recruiters in tech, but also ordinary people who were interested in entering the industry. We asked them what would make them (or what made them) choose to work in STEM. Here’s what they suggested:

Give Children Robots, Cars and Other Tech Tools to Play With, No Matter the Gender

The majority of our contributors agreed that the norms surrounding STEM germinate very early in childhood and that they’re created by us! We all have a responsibility to break these norms by allowing our children to play with whatever toys they want, no matter their gender.

Women participants could relate to not getting the same opportunities to play with cars as their male siblings and friends. This made it harder for them to identify with tech positions, as well as feeling as if they were a step behind when starting their education within STEM. After all, they had grown up learning how to nurture a doll or cook food, not how to take care of technical issues.

We can easily change this by observing our friends, siblings, and our own children and introducing them to tech toys. Talk to each other about this and show how teaching them to be technical problem solvers would benefit them in the future. Tell them how much someone in the STEM industry earns (it shouldn’t be too hard convincing them after that) or what amazing hardware or software programming skills can create.

I’ve already stressed the issue of how important it is to start the process of inspiring women’s interest in tech early on. Microsoft shows that girls’ interest in coding jobs tends to decrease from middle school onwards, even if they showed a strong interest in it previously. This means that it’s easier to inspire kids to continue on the STEM path than to teach them this when they’re older.

“[Today’s young students] are digital natives with the creativity and confidence to use STEM to drive to positive change. Yet we are failing to keep them engaged and excited” – Mary Snapp, Microsoft

We need to make girls’ STEM knowledge equal to boys in middle school so that they can have the same confidence in that area once they start college or high school.

Since programming subjects are very new to middle school curriculums in most countries, there is still an issue with teachers not having enough knowledge to teach programming thoroughly. As we move into a more digital area and these skills are growing amongst teachers, we will be able to fulfill the requirements of having female mentors and role models as well as having a more engaging STEM curriculum.

There’s been a whole lot of work in this area, which is probably the biggest contributor to helping more women and non-binary people become interested in tech. Silicon Valley Bank research shows that 59% of startups have programs that aim to support gender diversity and increase the percentage of women in leadership positions.

Their programs help women become more interested and confident within STEM positions. While the programs themselves are important, how they’re marketed and to whom matters as well. Through marketing towards minorities in the industry, we can show images of women working within these positions, which then helps others relate and become inspired to enter the field.

One of the main topics discussed was “imposter syndrome”, which occurs when someone doubts their own skills, fearing that their colleagues will see them as a fraud. This phenomenon doesn’t only affect women, but during the discussion we saw a pattern in how women deal with the syndrome, especially those studying or working within STEM. They reported how it was really difficult being in a minority while having a need to express their insecurities, whereas people around them didn’t have the same need and seemed very confident.

For example, a few female students shared that on their course only six of the 70 students are women. Whenever there is an exam, the women have a need to express to the other students how scared they are of failing at the exam because of the technical requirements, while their male classmates typically show confidence and say that they can’t relate to their fear (the fact that society raises men to not share their emotions could be a whole other article). This leads to many of them believing that their skills are worse than the other students (when they often scored similar or better than their male classmates), which then eventually led them to leave the course.

We need to change this! And it can be done so easily. If you work in a STEM industry, have made it through to the other side, and have gained confidence in your own skills, we need you! Start finding organisations that help women in tech and learn how you can support those that are in the situation you were once in. Share your story as much as you can—hopefully someone will be able to relate to it, find strength in it, and make the decision to keep going. Talk to your women colleagues and ask if they have experienced imposter syndrome; the chances are you both have similar stories.

If You’re in STEM and You Want to Take a Leadership Position, Look for Role Models Around You and Ask How They Did It

A woman digital leader on the panel shared her story about how she became a leader in an industry that is male-dominated. She was encouraged by her female boss who saw her potential and helped her become a team manager by supporting her every step of the way.

We need more women and non-binary people in leadership roles in general, but especially within tech. A report on women in technology leadership shows that only 5% of the CEOs in tech start-ups are women.

The panelists’ story shows how easy it is to gain confidence and shine within this area. If you are working in STEM right now, try to find someone who is senior to you and ask them how they did it or if they would like to be a mentor to you. There’s a high chance you’ll enhance your career, shake up the statistics, and create a more diverse industry. When you get there, find someone who you can mentor so that we can start creating a chain of strong women helping each other.

There are lots of ways to create a more innovative, inclusive digital world, and we can all take part in the solution! With the panel discussion, I wanted to find out what experiences other women and non-binary people had with entering STEM industries and if their experiences could help others.

The discussions gave me the understanding that massive changes can be made very easily. We don’t need to spend a huge amount of money or change policies; however, we do need to support each other, be role models for those who haven’t entered the industry, and speak up about changing gender norms early on. If every person could keep these suggestions in mind, women’s confidence in STEM would strengthen, and we would have a wider skillset to choose from in the IT industry, which would lead to a stronger and more diverse digital future.

Read More About Women in STEM

Learn more about diversity and the issue of women in tech with these articles from Envato Tuts+ instructors: 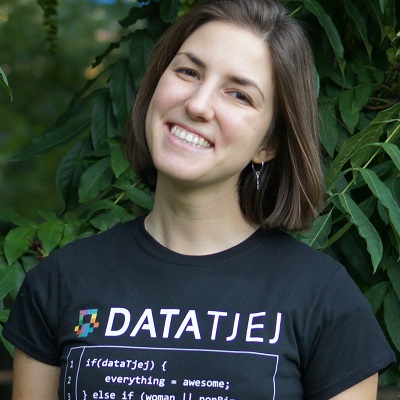 Nina Mujdzic
Gothenburg, Sweden
Swedish UX Designer & Web Developer that writes about the latest trends in UX and gender equality in the IT industry with a special interest in user research. You can follow her on Instagram @neendreams_
Weekly email summary